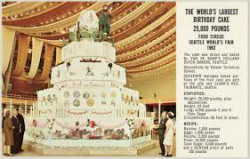 The  worlds largest
fruit cake weighs more than 3,500 kg. It was made by Just Bake and it was
displayed at Food and Kitchen in 2011,Tripua Vasini, and Place Grounds, in
Bangalore, Karnataka, India in December 2011. More than 400 trays were
baked.
The World Record for the biggest crab cake weighed more than
100.00 kg. It was baked by Special Olympics Maryland in conjunction. It was
baked in Hampden, Maryland, USA.
In 1975 the worlds largest cake was built 273 feet tall. The
total square footage of all of it was more than 260,000 feet.

What is worlds tallest cake? 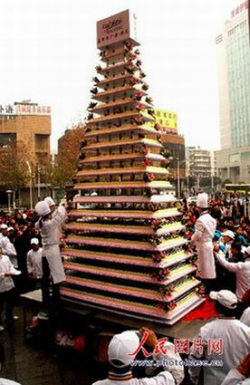 The worlds tallest cake was built by a French architect Jean
Bocabeille . Chef Gilles Stassart and a team of pastry chefs, architects, a
lighting designer, and a structural engineer. It stands at a height of 25.65
feet.
There are lots of claims about the tallest cake ever baked. One
was baked by a person for the Shiawassee County Fairgrounds in 1990. This  cake stood at 3-.85 m or roughly at 101
feet and 2 and one-half inches.

The worlds widest cake was built with more than 15,000 people.
The ingredients used with 514 cups of sugar, 224 cups of shortening, 192 cups of
eggs, 992 cups of flour, 576 teaspoons of salt,2048 tea spoons of baking powder,
448 cups of milk and more than 15 cups of vanilla!
In the morning of May 15,2005 more than 7 semi-trucks from the
state of North Carolina went to a loading zone called Cashman Center. The semi’s
held more than 30,000 of frosting and the volunteers were all ready unloading
unpacking and stacking.
In Las Vegas a Birthday cake was built 128,360 pounds! This
reached the Guinness World Record!